Digital Signature and Cryptography in Cryptocurrency

With the birth of cryptocurrencies, a new wave of progress has taken place that connects cryptography and distributed computing. The full extent of this technology's potential can only be appreciated through a thorough examination.

With the birth of cryptocurrencies, a new wave of progress has taken place that connects cryptography and distributed computing. Granted, cryptocurrencies represent a polarized concept in our minds: on the one hand, they are considered highly volatile and speculative assets, and on the other, they represent a revolutionary technology that represents the potential to transform existing systems and structures. There is a general consensus that understanding this nascent technology is a daunting task filled with technical jargon and complex concepts beyond most of us. The full extent of this technology's potential can only be appreciated through a thorough examination.

What is Digital Signature? 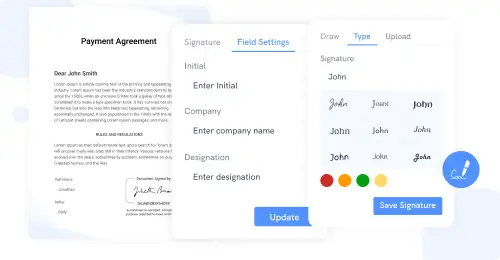 How does a digital signature work?

To Learn how digital signature creator work by taking a step-by-step look at this technology. Regardless of the type of digital signature—Bitcoin, PDF, SSL, or email—the steps are very similar.

Hashing (sometimes called "hashing" hashing function") is the process of converting any form of data into a unique string of alphanumeric text process requires the use of a hashing function, an algorithm that converts any data input into a data output (also called a “digest” or simply, a “hash”) with a fixed size. There are many hashing functions that can be used to convert data; the size of the digest depends on the hashing function used. There are two main types of hashing functions: Message Digest 5 (MD5) and Secure Hash Algorithm (SHA).

Cryptography is a means of securing data by encrypting it using codes, guaranteeing that only the intended receiver can process and read it. The technology that underpins cryptocurrency is based on cryptography. Asymmetric and symmetric cryptography are the two forms of cryptography. Symmetric cryptography is the process of encrypting (encoding) data on the sender's side and decrypting (decoding) data on the receiver's side using a single key (code). The key is only known by the two parties — the sender and recipient — ensuring the transaction's security. However, there is a risk of the key being compromised if it is shared over the Internet.

Why Do We Need A Digital Signature For Blockchain Transactions?

To develop locking and unlocking scripts that establish the requirements for spending a specific UTXO, Bitcoin leverages the Bitcoin Script programming language. Every transaction input includes an unlocking script that includes a public key (or address) as well as a digital signature. This helps the network to confirm that the UTXO spender has the right private key.

All communications are standardized and easily verifiable thanks to one-way hashing techniques that transform any type of data into an arbitrary "fingerprint." Any manipulation of the underlying data would be immediately detected because the digest would be completely different. When you add in a cryptographic system that uses a set of public and private keys, the resulting transaction has exponentially higher degrees of integrity and non-repudiation, two characteristics that are important to the blockchain. These two basic components form the foundation of digital signatures, which are employed by Bitcoin and, by extension, the majority of cryptocurrencies on the market. Every transaction is safe, thanks to a sophisticated and interdependent system of self-reinforcing rules that ensure that all parties involved in the process are intrinsically (economically) aligned.

Go to the next level with

What our customers say

I chose 500apps because of their value and incredible superior customer service. They really care about small-to-medium sized organizations like ours, whether you're very CRM experienced or lightly so. Every business needs a CRM these days. Compared to HubSpot or Fusion Marketing, they really present a better value and are quite robust yet simple to use. Very pleased!

I love 500apps. It's a perfect solution for startups. The price is right and the system does all I need it to. I had a small issue and called the customer service line. I was really impressed being able to speak with the team all the way from Australia. They resolved my issue immediately and were very nice to deal with. I highly recommend this solution. 500apps is excellent for startups who can't afford the high prices of alternative solutions out there.

500apps is a pretty compressive system for a good price. Plenty of integrations. Sales, marketing and help desk automation. I love that it integrates with IMAP and the chrome widget is brilliant for pulling in LinkedIn data. I've found the customer service incredibly responsive. These guys really care about their reputation.

Get Started with 500apps Today

Sign.cc is a part of 500apps Infinity Suite

Still not sure, sign up for our weekly webinar to know more about 500apps infinity suite. Register Today!

Still not sure, sign up for our weekly webinar to know more about 500apps infinity suite. Register Today!